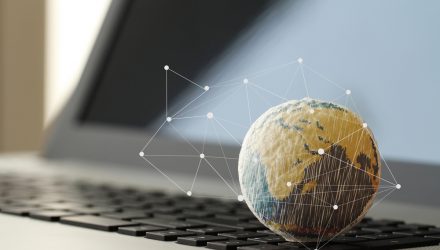 With last week’s settlement of the fine of Meituan, China’s major food delivery service, internet and tech stocks are soaring again in China this week.

The Chinese State Administration for Market Regulation fined Meituan 3.44 billion yuan, the equivalent of $534.3 million, for abuses of power as the dominant company within the online food delivery market, reported CNBC. The company has been ordered to change some of its business operations, and on Monday the stock surged 8% in Hong Kong markets.

Fellow tech giants Tencent and Alibaba were also up on the same day, rising 2.9% and 8%, respectively. Investors see the settlement of the fine as a potential end to the regulatory hammer that has fallen multiple times within the sector this year.

The KraneShares CSI China Internet ETF (KWEB) has taken massive hits in price valuations this year, but has become one of the most sought-after investments for pure-play exposure into the Chinese internet sector. The rise of tech stocks has once again sent KWEB’s inflows skyrocketing.

KWEB is now officially in the top 20 year-to-date for flows of all ETFs with $6.3 billion, and it is the only issuer within that grouping that is not a Big Five issuer, explained Eric Balchunas, senior ETF analyst for Bloomberg, in a tweet. Top five ETF issuers include BlackRock, Vanguard, State Street, Invesco, and Charles Schwab. What’s more, KWEB is beating out the popular Ark Innovation ETF (ARKK).

“It’s nabbed 50% of all the net flows into the 57 China ETFs and is now biggest by over billion,” Balchunas wrote in the tweet.

The KraneShares CSI China Internet ETF (KWEB) continues to be one to watch as the Chinese tech sector — particularly the internet industry — works to meet regulations and recover from its recent setbacks.

KWEB saw $880 million in net inflows at one point last month as investors bought the dip and were looking long term.