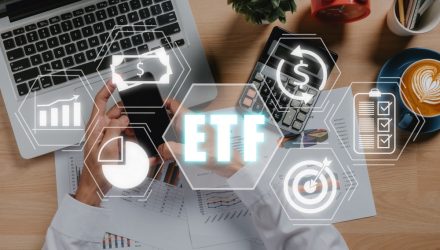 2023 marks the 30th anniversary of the U.S. ETF industry, and with the year just begun, it’s a good time to assess the 278 ETFs that are turning three years old, according to VettaFi. The three-year mark and track record is a coveted threshold for the strategies to prove their worth to investors, with three themes to watch for in 2023’s three-year mark ETFs.

It seems like just yesterday when markets were looking high and low for yield, with rates still low enough to make investors question the old 60/40 portfolio and look to alternatives for yield. A lot has happened in the last year that’s changed the math around alternatives, but that hasn’t stopped the alts strategies launched in 2020 from notching some wins as they enter their third year of operation.

Among all ETFs launched in 2020, three ETFs defined in the alts category by VettaFi finished in the top ten based on one-year returns, led by the top ETF according to that metric, the KFA Mount Lucas Managed Futures Index Strategy ETF (KMLM).

KMLM has returned 23.9% over one year using a managed futures strategy with long and short positions in commodity, currency, and global fixed income futures. It charges 92 basis points. While the ETF was actively managed, it now tracks an index as of April 1, 2022, according to its prospectus.

Alts strategies did even better among active ETFs, with the other two members of the trio, the Leatherback Long/Short Alternative Yield ETF (LBAY) and the First Trust Merger Arbitrage ETF (MARB) returning 21.2% and 3.5% respectively, and finishing in second and fourth in one-year returns among actives, according to VettaFi. The two finished third and ninth among active and passive ETFs.

Whether they can keep it up this year will be an interesting question given that the Fed’s interest rate hikes have made fixed income attractive again, but the answer may have some bearing on what kind of alternatives strategies get filed moving forward.

How to Assess Zero Fee ETFs

One might imagine zero-fee ETFs crushing all opposition from the start, but that certainly hasn’t been the case so far for the six zero-expense ratio ETFs listed in the ETF Database. Not only has there been a lack of new zero-fee ETFs launched, but they haven’t exactly impressed with returns.

Among 2023’s three-year mark ETFs are two of the six, both from BNY Mellon. The duo of the BNY Mellon US Large Cap Core Equity ETF (BKLC) and the BNY Mellon Core Bond ETF (BKAG) charge zero basis points to track Morningstar US Large Cap Index and the Bloomberg Barclays US Aggregate Bond Index respectively.

One source of the challenges the zero-fee ETFs are facing could be the continued importance of distribution compared to other factors like fees, with the BNY Mellon pair hoping that they can rev up their performance before they turn three this April.

Can Anyone Stop JEPI?

The one-year flows leader among 2023’s three-year mark ETFs with $13.1 billion and a staggering 8% annual dividend yield, a solid $17.7 billion in AUM, and a 35-basis point fee, the JPMorgan Equity Premium Income ETF (JEPI) may be the big dog to keep an eye on before its third birthday in May.

JEPI has ridden investors’ late 2022 dive into dividends, outperforming both its ETF Database Category Average and its Factset Segment Average over three months returning 5.7% compared to 3.9% and 1.5% for its categories, respectively. The active strategy, which sells options on U.S. large caps to generate income and targets low-vol, value stocks in the S&P 500, also added $1.5 billion in net inflows over just the last month, to add to its case.

Its returns don’t stand up to others over one year, though returning -3.6%, which does outpace its categories by some margin, but not some of the slightly more expensive equity ETFs in the class like the American Century Focused Large Cap Value ETF (FLV) which has seen a 0.7% return over one year but a seven-basis point more expensive fee at 42 basis points.

2023 may not be able to surpass 2022 or 2020 for geopolitical, rising rate, or inflationary volatility, but it will certainly give it its best shot, so the Class of 2020 could still be thrown for a whirl. Managers, advisors, and investors will certainly be watching 2023’s three-year mark ETFs, still, to see which themes and trends bear fruit.