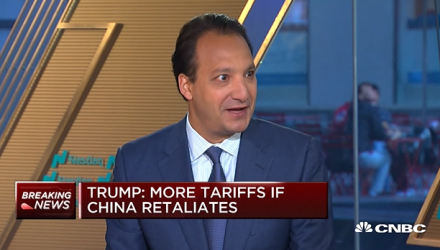 The latest news of U.S. President Donald Trump imposing a 25 percent charge on up to $50 billion in Chinese goods sank five large China ETFs in the process.  At the opening of the U.S. markets, the Dow sank over 200 points, the S&P 500 sank 12 points and the NASDAQ was down 30 points.

China is expected to go tit for tat as the Chinese Commerce Ministry announced that retaliatory measures are in store as a result of the Trump Administration’s latest move.

“This continues to be a key issue for the market but we don’t want to overstate it,” said Ed Campbell, managing director for QMA. “We expected China to retaliate, but if we only get one round of retaliation and this doesn’t escalate, it won’t be as bad.”

One of President Trump’s most vocal critics, Senate Minority Leader Chuck Schumer, gave the latest tariffs on Chinese goods his unbridled support.  This surprise comes after some Republican lawmakers and pro-business groups were critical of the tariffs.

.@realDonaldTrump’s actions on China are on the money. China is our real trade enemy, & their theft of intellectual property & their refusal to let our companies compete fairly threatens millions of future US jobs. https://t.co/28UM7p9v2c