You are at:Home»Equity ETFs»China ETFs Plunge as Beijing Orders U.S. Out of Chengdu Consulate 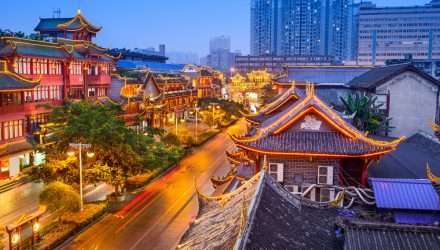 China country-specific exchange traded funds were among the worst performers on Friday after Beijing told Washington to vacate a Chengdu U.S. consulate in retaliation to its own closed consulate in Houston, further deteriorating the relationship between the two countries.

Chinese markets plunged after China’s foreign ministry said it ordered the U.S. to close its consulate in the southwestern city of Chengdu, Bloomberg reports.

The response was seen as retaliatory action after the Trump administration earlier this week ordered the closure of a Chinese consulate in Houston on accusations that the diplomatic outpost was involved in economic espionage and visa fraud.

“Markets can now contemplate a serious escalation in US-China tensions that runs far beyond the risk of mere tariffs; and of a looming lurch lower in the US economy, which might necessitate even more focus on foreign policy as a distraction,” Rabobank analysts said in a note, according to Business Insider.

The pullback also came at an inopportune time as the government takes steps to manage a debt-fueled melt-up that had pushed equities to their highest level since 2015, with bullish traders pushing leverage to an almost five-year high.

“Worries over China-U.S. relations will dominate the market,” Raymond Chen, a portfolio manager with Keywise Capital Management (HK) Ltd, told Bloomberg. “People will be closely watching how the U.S. reacts to the closure of Chengdu consulate. I expect more panic selling in the near term.”