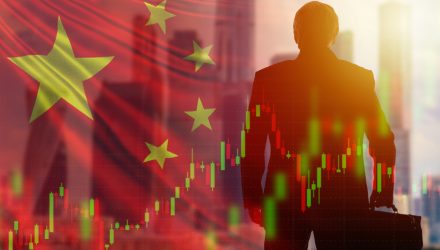 China country-specific exchange traded funds strengthened after the People’s Bank of China executed an unexpectedly deep cut to its benchmark reference rate for mortgages in a bid to revive the ailing housing sector and support the stumbling economy.

The People’s Bank of China on Friday cut its benchmark rate on loans of five years or more to 4.45% from 4.6%, the biggest single rate cut since the bank first began monitoring this market segment in 2019, the Wall Street Journal reports. In comparison, the central bank previously made a 0.1 percentage-point cut in early 2020.

The rate change was also unexpected since the central bank left another key policy rate charged on loans from a medium-term lending facility that funnels cash to commercial banks unchanged earlier this week. On Friday, the PBOC also added that it would maintain the benchmark rate for one-year loans unchanged at 3.7%.

The latest move “is an even stronger signal that instead of opting for a broad-based monetary easing they want to do more-targeted easing,” Tommy Wu, lead China economist at Oxford Economics, told the WSJ.

Senior officials have promised to combat a slowdown in the economy that has been weighed down by COVID-19 outbreaks and lockdown measures, which hindered economic activity. Market participants also hoped that Friday’s move was a response to Chinese Premier Li Keqiang’s bid to decisively increase policy adjustments and let the economy return to normal quickly, Reuters reports.

“Today’s reduction to the five-year Loan Prime Rate should help drive a revival in housing sales, which have gone from bad to worse recently,” Julian Evans-Pritchard at Capital Economics said in a note.

“But the lack of any reduction to the one-year LPR suggests that the PBOC is trying to keep easing targeted and that we shouldn’t expect large-scale stimulus of the kind that we saw in 2020.”