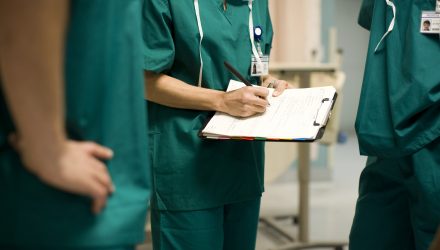 Checking Up on Health Care ETFs Ahead of 2018

Health care stocks have fallen out of favor as the rotation out of 2017 winners and into the laggards (mostly financials and industrials) took hold after Thanksgiving and as the Senate passed its tax reform bill.

Prior to then, the sector was the second-best performer in the S&P 500 on a year-to-date basis. Even so, health care stocks are still up 18.9% through December 6, ahead of the 17.4% advance in the S&P 500. CFRA remains overweight on the sector as the year closes and 2018 gets underway. We view the fundamentals as understated, valuation continues to be compelling and the defensive nature will serve as a hedge for market uncertainties that linger.

Starting with the fundamentals, this is a sector that has consistently outperformed expectations in 2017 by a wide margin. In each of the three quarters completed in 2017, health care earnings growth was between 400 and 600 basis points (bps) better than initial consensus estimates (versus the average beat rate of 350 bps for the S&P 500). It’s been a sector troubled with political uncertainties throughout the year.

The impact sent 2017 consensus earnings growth projections sharply lower from where they stood as the year began. Between December 30 and the start of May, 2017 growth estimates were slashed by more than any other sector; from 7.4% to 3.6%. In contrast, S&P 500 earnings projections during the same time period went from 11.8% to 11.1%. Now that three quarters are locked-in, 2017 health care growth is pegged at 5.0% and the S&P 500 growth rate has fallen to 10.8%.