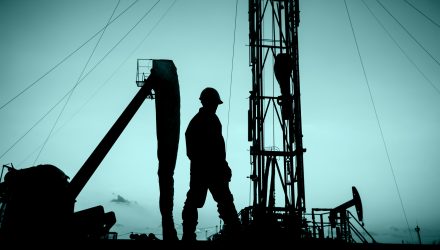 “Goldman Sachs last week once again took the opportunity to espouse its bullish view on black gold. The investment bank thinks ‘the dollar will likely weaken from here,’ and said any impact from Chinese tariffs on U.S. crude exports will be quickly absorbed by the market,” according to Schaeffer’s Investment Research.

“With crude oil having gained in the neighborhood of 66% over the last 52 weeks, data from Schaeffer’s Senior Quantitative Analyst Chris Prybal throws some cold water on the bull case for oil. Looking back to 1978, Prybal found that in the 35 instances where crude oil was up by 50% or more on a year-over-year (YoY) basis, the commodity went on to underperform its historical average returns,” reports Schaeffer’s.