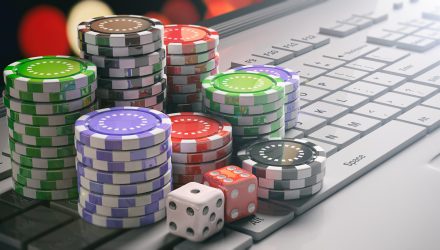 Casino ETF Gets a G20 Lift

The VanEck Vectors Gaming ETF (NYSEArca: BJK), the lone exchange traded fund dedicated to casino operators and gaming companies, rallied Monday after getting a lift from news out of the G20 summit held in Argentina over the weekend.

Over 16 countries are represented in BJK with the U.S. commanding nearly 40% of the fund’s weight, but good news for Macau is helpful to the ETF because it devotes almost 14% of its weight to China. Macau is the only Chinese territory where gambling is legal.

“And an easier macroeconomic environment further helped the beaten down stocks, as the ‘constructive outcome from Presidents Trump and Xi’s G20 meeting’ should help the stocks recover, at least in the near term, according to Morgan Stanley,” reports Bloomberg.