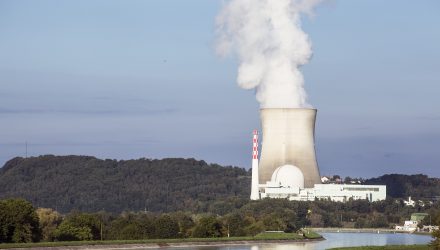 A Uranium sector-related exchange traded fund was among the best performers Thursday after the Tax Court of Canada ruled in favor of Canadian uranium producer Cameco Corp. (NYSE: CCJ) over a dispute on the reassessments the Canada Revenue Agency issued.

The Global X Uranium ETF (NYSEArca: URA), which tracks global uranium miners, was among the best performing ETFs on Friday, rising 4.3% and briefly testing its long-term resistance at the 200-day simple moving average.

The company sells uranium to a marketing unit in Switzerland, which re-sells to buyers, incurring a lower tax rate than the company would have triggered if sold through its Canadian offices.

Due to the tax ruling, the Minister of National Revenue will issue new reassessments for the 2003, 2005, and 2006 tax years, which could get the company to receive a refund with interest.

“It was a clear and decisive ruling in our favor. Our company has been through a lot over the last several years, so this is a great day for Cameco,” Cameco’s Chief Executive Officer, Tim Gitzel, told a conference call with financial analysts, the Financial Post reports.