You are at:Home»Alternative ETFs»Bullish Investing Bets Rise on the Euro 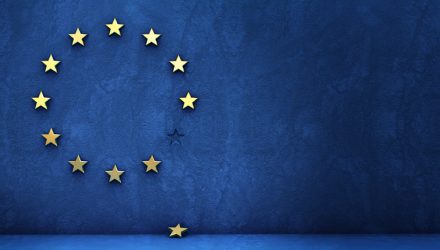 It has caught some traders by surprise, but dollar weakness couple with euro strength has made the CurrencyShares Euro Currency Trust (NYSEArca: FXE), which tracks the euro’s price movements against the dollar, is one of this year’s best-performing developed market currency exchange traded funds.

Up 3.4% over the past month, FXE is higher by 11.5% year-to-date. Some traders previously tempted fate and shorted the euro, believing the common currency was overbought and that the dollar was overdue to rally. However, the euro has remained persistently strong while the opposite is true of the dollar, prompting some professional traders to boost their bullish euro bets.

“The shared currency has snapped its losing streak to become the best performer among Group-of-10 peers in 2017. After plunging to a 14-year low in January, the currency has staged a stunning comeback, rising to $1.1910 on Aug. 2, a level not seen since January 2015,” reports Lananh Nguyen for Bloomberg.

The PowerShares DB U.S. Dollar Index Bullish Fund (NYSEArca: UUP), the tracking exchange traded fund for the U.S. Dollar Index, is getting hammered this year. UUP tracks the price movement of the U.S. dollar against a basket of currencies, including the euro, Japanese yen, British pound, Canadian dollar, Swedish krona and Swiss franc. Other currencies, including the Australian dollar, yen and Canadian dollar have recently been gaining momentum against the greenback.

“Hedge funds initially missed out on the euro rally by holding net-bearish bets until May before jumping in, according to data from the U.S. Commodity Futures Trading Commission. Since then, speculators have piled headlong into bullish bets, building up the biggest net-long position in six years,” according to Bloomberg.

FXE has recently spent time as one of the most heavily short ETFs, but the euro’s continued strength could force traders that are short the ETF to cover those positions. Year-to-date, FXE has seen inflows of $99 million while UUP has lost nearly $227 million in assets.