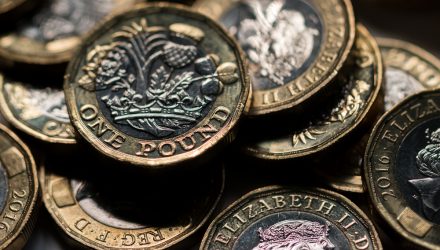 The United Kingdom’s pound sterling and currency-related exchange traded fund plunged Thursday after the Bank of England hiked rates to their highest level since 2009 but warned of recession risks.

Meanwhile, the sterling retreated to a low of $1.23615, its lowest level against the greenback since July 2020, and was on its biggest one-day pullback since March 2020, or one of the worst days since the Covid-19 pandemic first settled in, Reuters reports.

While BoE Governor Andrew Bailey said the forecasts did reflect a technical definition of recession, the economy is still in for a very sharp slowdown.

“The weakness of the growth outlook means that the inflation outlook is pretty weak too,” Chris Scicluna, head of economic research at Daiwa Capital Markets, told Reuters. “Markets are right to take a step back, and we had thought that scale of tightening priced in was excessive.”

Furthermore, the BoE hiked its estimates for price growth, which now reveal consumer price inflation jumping above 10% for the last three months of the year, compared to earlier predictions of a peak of 8% in April.

Meanwhile, the Monetary Policy Committee exhibited dividing opinions, with two members arguing that the guidance was too strong, given the risks to growth, and three policymakers wanted a larger 50 basis point interest rate hike.

The BoE’s nine rate-setters voted 6-3 for a hike in Bank Rate from 0.75%, with Catherine Mann, Jonathan Haskel, and Michael Saunders calling for a bigger increase to 1.25%, Reuters reports.

“The new forecasts, taken together with the increasing division among committee members, suggest the Bank is getting closer to a pause in its tightening cycle,” ING economist James Smith told Reuters.