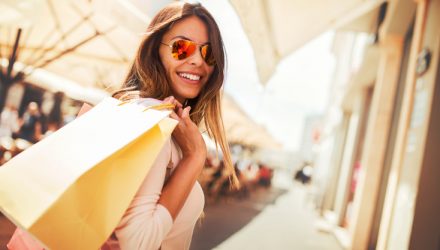 While most of market’s attention has been focused on up-and-coming online retailers in a digital age, the traditional retail segment and sector-related ETFs have enjoyed a strong year.

The SPDR S&P Retail ETF (NYSEArca: XRT) gained 11.7% year-to-date and has reached record highs, outperforming the 7.3% rise in the S&P 500, as brick-and-mortar retailers like Costco, Nordstrom, DJX, Ross Stores and Five Below pushed toward 52-week highs.

“It looks like we have a double bottom here that’s set up this push, and it looks like if the broader market does stabilize, XRT could punch up through $50,” Todd Gordon, founder of TradingAnalysis.com, told CNBC. “It looks like the recovery is in motion.”

XRT Catching Back Up to Amazon?

XRT has already punched above the $50 level, hitting new all-time highs, but remains stuck within range over the past few weeks.

Gordon also pointed out that the XRT formed a “double bottom” after touching a multiyear low just under $38 in early 2016 and again last August. A so-called double bottom pattern typically indicates a technical level of support for chart watchers.

However, the road to its current success has been filled with hurdles.