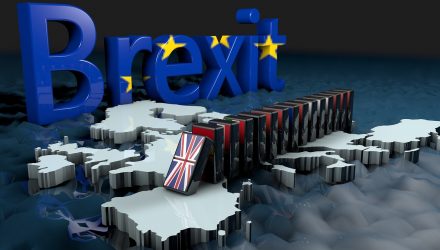 Drama surrounding Brexit negotiations has U.K. stocks and exchange traded funds, such as the iShares MSCI United Kingdom ETF (NYSEArca: EWU), in the spotlight, but Brexit is also weighing on some other Europe ETFs.

That includes the iShares MSCI France ETF (NYSEArca: EWQ), the largest France ETF. Domestic political battles over the terms of the exit have intensified, with the resignation of two British cabinet members whom favor a decisive break with the E.U. The talks have worsened with U.K. Prime Minister Theresa May seeing cabinet ministers depart while receiving at least one “no confidence” letter from a member of parliament.

As for France, the Eurozone’s second-largest economy behind Germany, losses for stocks there are accelerating in the current quarter. EWQ has a fourth-quarter loss of almost 12% and investors are responding by leaving the fund.

“The $644 million iShares MSCI France ETF, or EWQ, saw $106 million of outflows on Monday, the most for a single day in more than a decade. A chunk appeared to come from one investor, as a block trade of 2.5 million shares worth more than $71 million printed just after the market closed Monday,” according to Bloomberg.

European equity markets have lagged the U.S. for a lengthy stretch, but even amid potential Eurozone political volatility, some market observers believe Europe could be a desirable developed market destination in 2019.

EWQ is heavily allocated to high-end consumer goods makers, so if the global economy and consumer spending in major markets like the U.S. and China remain firm next year, EWQ has some potential to shake its laggard status.