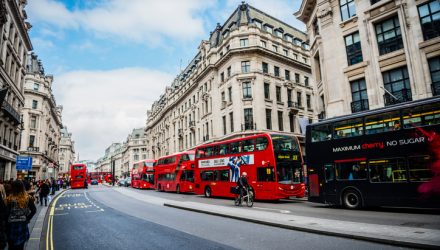 Rising inflation is another issue that could weigh on EWU and U.K. equities.

“Higher prices (headline inflation hit a five-year high in September) are hurting consumer spending, as wages are not keeping pace,” said BlackRock. “This is reflected in third-quarter retail sales falling to levels last seen in 2013. Our BlackRock Growth GPS for the UK has ticked down, as the orange line shows in the chart below, suggesting 12-month consensus estimates for UK gross domestic product (GDP) will move slightly lower.”

A crimped consumer would likely impact EWU. The $2.6 billion ETF allocates over 26% of its combined weight to consumer staples and consumer discretionary stocks. Financial services is the ETF’s largest sector weight at almost 22%.

“The UK’s muted growth outlook stands in stark contrast to 2016, when the UK sat close to the top of G7 growth charts alongside Germany,” according to BlackRock. “Brexit negotiations in particular are weighing on the UK economy. Significant progress on three key issues is needed for discussions to move on to the post-Brexit trade relationship between the UK and European Union (EU): the rights of EU citizens in the UK and vice versa, the UK’s financial obligations to the EU, and the Irish border.”