You are at:Home»Equity ETFs»Brazil ETFs Could Be Picking Up Momentum 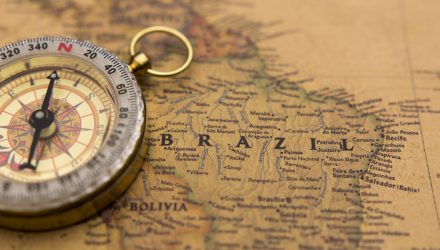 Brazil ETFs Could Be Picking Up Momentum

Brazil country-specific exchange traded funds jumped Tuesday after Wall Street analysts upgraded their outlook on the emerging economy in response to the better-than-expected first quarter GDP that was bolstered by investment and expanding agriculture sector.

Goldman Sachs Group analysts raised its growth forecast for Latin America’s largest economy to 5.5% from 4.6%, while Bank of America analysts increased their projections to 5.2% from 3.4% after Tuesday’s data release by the national statistics agency, Bloomberg reports.

“We expect the economy to recover visibly in coming quarters,” Goldman Sach’s Alberto Ramos said in a note.

Brazil’s gross domestic product expanded by 1.2% over the first quarter from the previous quarter, or better than the 0.9% median estimated from analysts. Additionally, the economy grew 1.0% year-over-year for the first quarter, according to the statistics agency.​

The Brazilian economy exhibited surprising resilience for the first quarter, showing strength despite a break in emergency accommodative handouts, the country’s first rate hike, and the jump in Covid-19 infection rates.

The improvements in the investment and savings-to-GDP ratios are a positive sign for the emerging market’s growth outlook in both the near- and medium-terms.

Nevertheless, the pandemic remains a major factor for the short-term outlook, as does policy uncertainty. Both factors could weigh on the outlook for the real currency, interest rates, and general confidence.

Looking ahead, policy makers and private sector analysts are growing increasingly confident in growth that could cross 4% this year. Economy Minister Paulo Guedes also concurred with private estimates, adding that Tuesday’s latest data signaled the country’s improving outlook for the rest of the year.