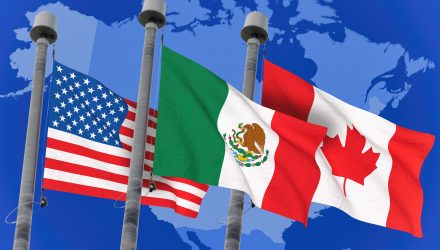 U.S. Treasury bond yields got a boost from the United States and Canada agreeing to a deal that would effectively rework the North American Free Trade Agreement and avert a trade war between the two economic superpowers. Benchmark U.S. debt like the 10-year Treasury rose to 3.074 and the 30-year yield ticked up to 3.224.

In late August, the U.S. struck a deal with Mexico to effectively eliminate NAFTA and create the United States-Mexico Trade agreement–a deal that would likely move forward solely between the two countries if an agreement could not be reached with Canada. However, after continuing negotiations that extended past an initial August 31 deadline, the revamped NAFTA agreement, dubbed the “United States-Mexico-Canada Agreement (USMCA)”, was announced Monday.

“This is a terrific deal for all of us,” said U.S. President Donald Trump during a press conference following the announcement of the agreement. “This deal will be the most modern, up-to-date and balanced trade agreement in the history of our country.”

“Likewise, it will be the most advanced trade deal in the world with ambitious provisions on the digital economy–patents, financial services and other areas where the United States has a strong competitive advantage,” Trump added. “Mexico and Canada have agreed to labor protections, environmental protections and new protections for intellectual property.”

Furthermore, the USMCA agreement also includes key provisions with respect to the auto industry that encourages increased U.S. car production, while at the same time, protects Canadian and Mexican companies from the imposition of further U.S. tariffs by the Trump administration.