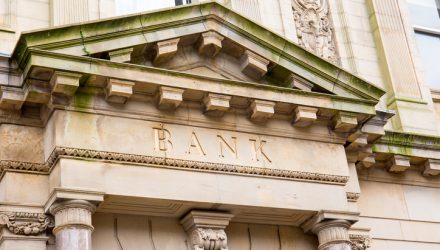 After languishing through a rough second quarter, the financial services sector and the related exchange traded funds, such as the Financial Select Sector SPDR (NYSEArca: XLF), could be seen as third-quarter rebound candidates.

However, some market observers still see weakness in the S&P 500’s second-largest sector weight. Earlier this year, financials were also propped up by a rise in bond yields as higher interest rates typically widen the margin spread between bank loans and deposits. The spreads will further widen as the Federal Reserve has stated its intentions to raise interest rates in response to economic growth and rising inflation.

“The price action couldn’t have been more different. Financials badly underperformed the broader market in the first half of the year. The financials-tracking XLF has been modestly positive in recent sessions, but only after posting its longest losing streak on record — 13 days,” reports CNBC.

After slumping more than 3% in the second quarter, XLF sports a year-to-date loss north of 4% at a time when the sector’s fundamentals and valuations look appealing, indicating price action for financial actions may not be consistent with some positive news. Additionally, XLF faces technical challenges.

“Despite relatively positive stress test results last week, banks as a group closed lower on the week, and the charts remain dubious. The XLF bounced off support near the $26.50 mark, but it remains to be seen whether the recent bounce can hold,” according to CNBC.

Investors pulled over $1 billion from XLF in the second quarter.

or more information on the banking sector, visit our financial category.