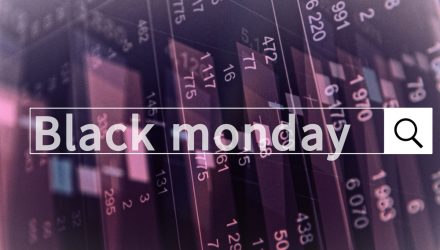 As the kids say, folks have been “sliding into my DMs,” asking what the heck happened to the short-duration, cash-like ETFs on Monday.  In case you missed it, ETFs like the JP Morgan Ultra-Short Income ETF (JPST) and PIMCO Enhanced Short Maturity Active ETF (MINT) had record volume days, trading down with pretty much everything else.

Both funds exhibited out-of-character drops early in the trading day, as everyone was still trying to evaluate things from the opening halt.  For example, here are the intraday charts of the two ETFs, stacked on top of each other: 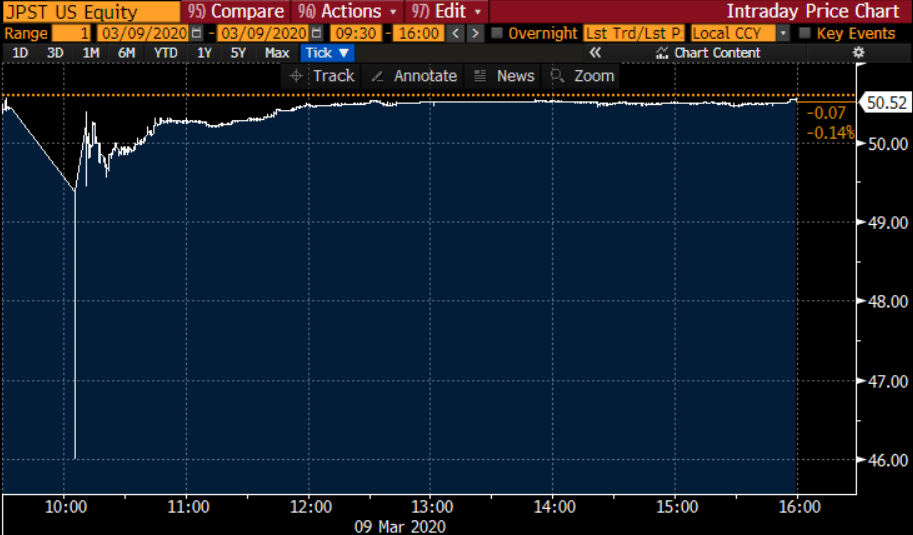 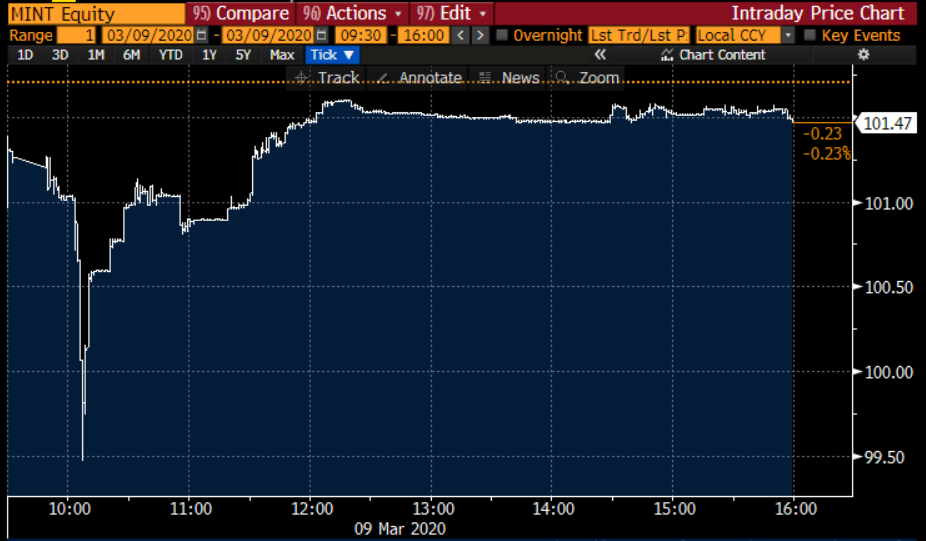 So let’s dig in and understand what’s really happening here.  First, notice the scale on the right-hand side of both charts.  While the drops at 10:07 or so look precarious, remember that these are short term bond funds.  Almost ANY movement will look big compared to normal trading.  In the case of MINT, the “hiccup” here is that the fund briefly dropped about a percent and a half.  In the case of JPST, it looks a bit more severe, suggesting a nearly 10% short term dislocation.

Without even going into the forensics, the narrative here isn’t hard to process.  Monday morning, all sorts of traders were facing some tough decisions. The toughest kind of decision is the nastygram from your prime broker telling you you need to get cash into the system to make a margin call.  How do you make a margin call in a hurry? You sell the stuff you own that’s closest to cash, or easiest to liquidate.  Both of these funds qualify. They each trade more than $100 million a day on an average day, and multiples of that on big days.  And the underlyings themselves are usually liquid too.  JPST, for its part, is about half in agency/treasuries or cash, and about half in Corporate bonds. Most of the fund is investment grade or better, with about 18% of the fund in dreaded BBB paper.  But still, this is short term paper. It’s supposed to be easy to move around.  Selling these positions to raise cash makes sense.

So clearly, somebody, or somebodies, was unloading.  But the dynamics of these two “weird” trades are radically different.  Let’s start with MINT.  The important thing about what happened in MINT is that it’s utterly rational.  What I mean by that is that there is no “event” on the tape to which you can point and say, “this is a bad trade!!!”.  Far from it, instead, you see an orderly marching down of bids and asks, with trades at midpoints, until the market finds the bottom and it starts recovering. 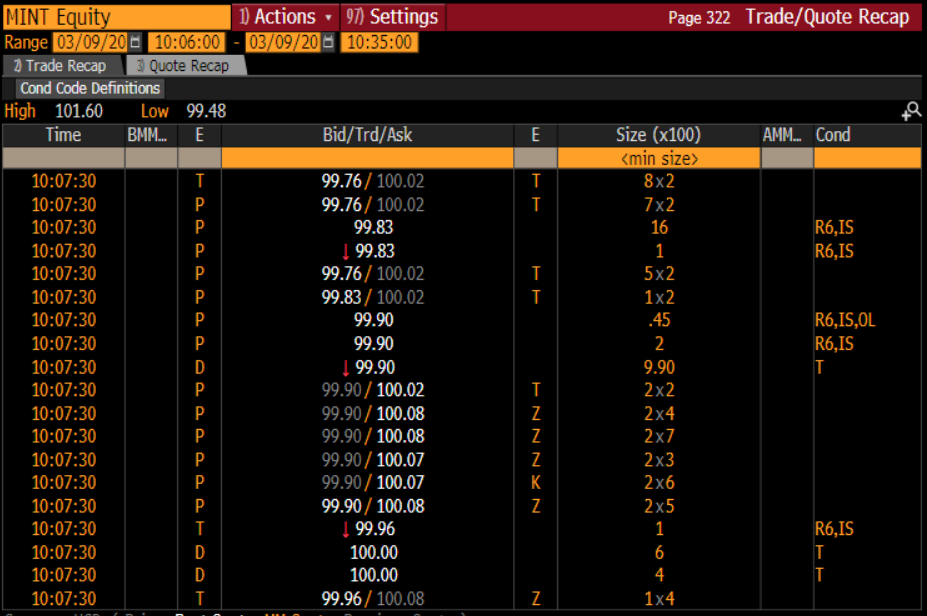 This is deep “nothing to see here, move along” territory.

But then there’s JPST.  JPST was actually halted right before this, hence the straight line on its chart from right after the open until 10:07 or so. When a security is halted like this on the CBOE (and its similar with every exchange), there’s a process for reopening the ETF (or a stock, for that matter)  The first thing that happens is that there’s a 5-minute quote-only window before the security is scheduled to begin trading again.  During that period, much like the opening every day, market participants can put in their hoped-for prices.  What they’d buy and sell at, and how much.  Those limit orders are used to create a new auction where the maximum amount of shares trade hands.  Which is what we see here: 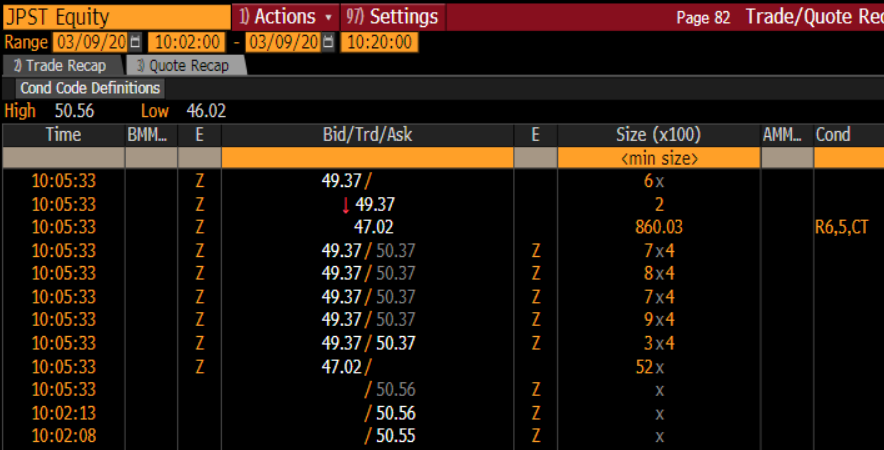 During this quote window, before the opening trade, we see a Bid of $47.02 for 5200 shares.  That’s by far the biggest bid on the books at that point, and it’s a doozie, more than $2 away from the previous bids. Within the same trading second, the auction resolves, with that large $47.02 on the books, which gets hit, not just for the 5200 shares asked for, but for 86,000.  The market then took a second or two to absorb this info, punched some more trades at this level, and then sharply reconsidered and repriced.

Is this a “bad” trade?  Not really.  It’s the absolute evil of market orders. You might think the opening auction would skip all those folks who put in a “sell now I don’t care” order, but you’d be wrong.  If you enter a market order at this time, you get put against the best bids to clear the maximum number of shares.  There are collars to make sure that price isn’t outrageous, but the collars are set generally at +/1 5% for a security with a handle between $25 and $50.  But all market orders are considered for the reopen auction, so all of them got hit at that $47.02 price, for a grand total of $4 million in unhappy campers.

So what does this mean for you, the investor, who might be scrambling to unload positions at some point when the Margin Legbreakers come calling?  It means even YOU shouldn’t be using market orders.  I don’t care how liquid the security is, or how much information you have, for the love of all that’s holy.

Just don’t do it.