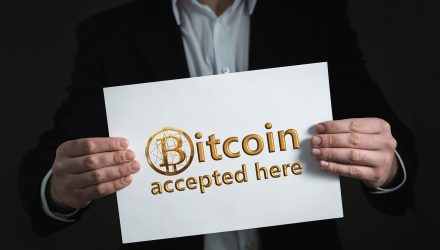 Bitcoin Technicals: Trouble on the Horizon

While the price of bitcoin, the largest cryptocurrency, has spent most of the past several years surging, there is no denying the digital currency has been swooning in recent months. Bitcoin rallied to around $20,000 in December but floundered below $8,200 early Thursday afternoon.

Some technical analysts see more downside as a possibility for volatile digital currency.

“Over the past year, Bitcoin has been creating what looks to be a narrowing pennant pattern, characterized by each line, which is a series of higher lows and lower highs. Pennant patterns are NOT very helpful in suggesting the direction an asset will take when the pattern ends,” reports ETF Daily News.

Bitcoin futures debuted on the Cboe in December, followed by a launch on the CME. Nasdaq Inc. is still considering entering the bitcoin futures competition. Market observers previously expected Nasdaq to launch futures on the digital currency this year, perhaps as early as the second quarter. After bitcoin, the largest cryptocurrencies are Ethereum, Ripple, Bitcoin Cash and Litecoin