You are at:Home»Alternative ETFs»Bitcoin Drubbed Following Raid on Korean Exchange 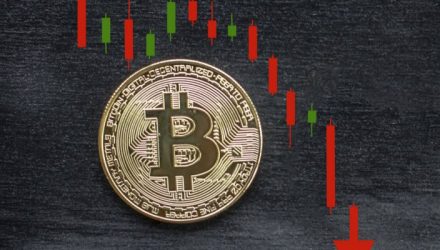 Bitcoin prices tumbled below the psychologically important $9,000 to reside just below $8,600 at this writing. More severe losses were seen throughout the cyrpto universe as seven of the top 10 digital currencies by market value experienced Friday losses of more than 10%.

“The top digital token broke its streak Friday after South Korean prosecutors raided the offices of Upbit, one of the world’s largest cryptocurrency exchanges, renewing concerns that heightened regulatory scrutiny around the world could hurt business and dampen enthusiasm for digital assets,” reports Bloomberg.

Bitcoin On The Decline

However, the near-term view is murky, particularly with the move below $9,000, which is renewing calls for an ominous death cross on bitcoin. Bitcoin’s recent rally above $9,000 comes just a couple of weeks after the cryptocurrency committed a death cross, where its 200-day moving average fell below its 50-day line. The death cross is normally bearish, but it needs to be validated, something bitcoin did not do.