You are at:Home»ETF Strategist Channel»Bitcoin Bubble About to Burst? Not So Fast… 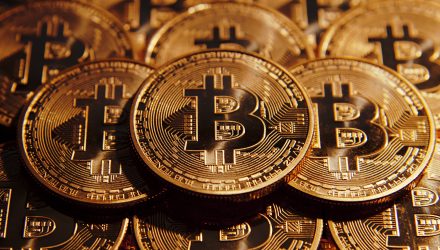 Bitcoin Bubble About to Burst? Not So Fast…

For every social media darling claiming to have struck it rich with Bitcoin, there’s a prominent investor calling it a fraud or bubble. You’d probably want to trust Warren Buffett over @MrMoneyBags on Twitter, right? As the College Football Analyst, Lee Corso, likes to say, “Not so fast my friend!” The funny thing about bubbles is that they usually aren’t deemed as such until after they have burst. That makes pinning Bitcoin a bubble ready to burst very difficult. Following the housing market crash, Forbes wrote an article detailing the five steps of a bubble. The following will look at where Bitcoin may fit into the stereotypical bubble.

1) Displacement: A displacement occurs when investors get enamored by a new paradigm, such as an innovative new technology or interest rates that are historically low.

Bitcoin, or better yet, blockchain technology, seems to fit the bill here. Blockchain is being tabbed as an extremely disruptive technology for many industries. Many people see Bitcoin as the way to invest in the underlying technology.

2) Boom: Prices rise slowly at first, following a displacement, but then gain momentum as more and more participants enter the market, setting the stage for the boom phase. During this phase, the asset in question attracts widespread media coverage. Fear of missing out on what could be an once-in-a-lifetime opportunity spurs more speculation, drawing an increasing number of participants into the fold.

Again, the description of boom sounds very similar to what is taking place with Bitcoin. There are now more Coinbase accounts (a way to purchase Bitcoin and other cryptocurrencies) than there are Charles Schwab brokerage accounts. Coinbase’s mobile app has also become the number one app on Apple’s App Store, even overtaking the extremely popular social media apps.

Bitcoin has made its way into mainstream pop culture as well, a recent episode of the popular TV series, The Big Bang Theory, revolved around the discussion of Bitcoin. The chart below shows the trend in the Google search, “How to buy bitcoin,” interest has skyrocketed in the 4th quarter. These things all show the gain in interest that has taken place in Bitcoin.