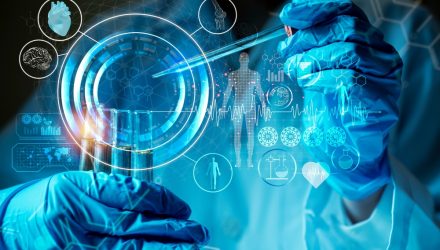 Biotech ETFs Are on the Mend

For instance, the SPDR S&P Biotech ETF (XBI), which follows a more equal-weight indexing methodology that provides greater emphasis on mid-sized companies, increased 41.4% from its May lows while the iShares Biotechnology ETF (IBB), which follows a traditional market capitalization-weighted methodology, gained 21.8% from its June lows, the Wall Street Journal reported. In comparison, the S&P 500 advanced 16.9% since its 2022 lows in June.

The swift rebound in the biotech segment may also have to do with the cheaper valuations. The S&P Biotechnology Select Industry Index is still down 20.6% this year and has underperformed all S&P 500 sectors, excluding communication services.

Additionally, biotechs enjoyed the rebound with the recent demand for the growth style. The riskier U.S. equity segment has been leading the charge off the lows as the lower inflation readings and bets on a less aggressive Federal Reserve all added to the risk-on sentiment.

Meanwhile, high-profile clinical studies have been promising, adding to the optimism over medical breakthroughs and new therapies for targeting diseases and illnesses. For example, Karuna Therapeutics Inc. showed positive results in a late-stage trial for a schizophrenia treatment.

“Having a medicine with a low side-effect profile that has such a major impact on all aspects of schizophrenia is a game changer,” Robert Nelsen, co-founder of Seattle-based venture-capital firm Arch Venture Partners told the WSJ. “Current drugs have huge side effects and less effectiveness, and patients won’t stay on them.”

“The uncertainty over the Medicare drug pricing was replaced with certainty on what the price controls would look like,” Jeffrey Jay, co-portfolio manager of the hedge fund Great Point Partners, told the WSJ.

Lastly, several high-profile acquisitions have made it through the biotech industry, with companies like Pfizer, Amgen, and Merck & Co. targeting smaller players.

“We’ve been waiting and waiting, but M&A has finally woken up,” healthcare investor Brad Loncar at Loncar Investments told the WSJ. “A company like Pfizer can spend tens of billions of dollars on M&A and not flinch.”