You are at:Home»Equity ETFs»Biotech Decline Could be a Buying Opportunity 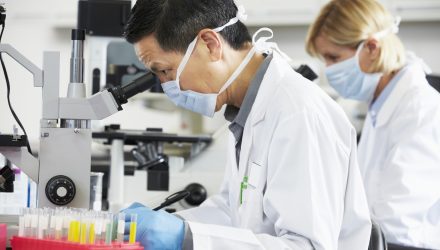 Biotech Decline Could be a Buying Opportunity

With Tuesday’s decline, IBB is down 10% over the past month while XBI is lower by more than 9%. A decline of 10% from a recent high is the standard definition of a correction. IBB, which holds nearly 190 stocks and is a cap-weighted ETF, has a price-to-earnings ratio of just over 21 and a price-to-book ratio of 4.92. The ETF’s three-year standard deviation is just over 25 percent.

Some market observers believe the recent declines among biotechnology stocks could signal a buying opportunity for prescient investors.

“This move comes on the back of a string of disappointing earnings for mega-cap biotech in late October, said Chad Morganlander, portfolio manager at Washington Crossing Advisors; he pointed specifically to disappointments from Gilead and Celgene. Still, he likes the space,” reports CNBC.