You are at:Home»Featured»Bill Gates: Current Trade Tensions are ‘Scary’ 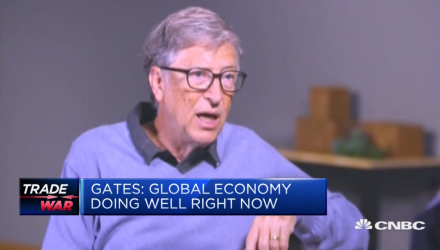 In an interview with CNBC, Gates said that the global economy is “doing quite well right now,” but warned that under increasing tariffs, it’s “not going to do as well.”

When asked what he believes would be the ‘tipping point’ to a full-fledged trade war, Gates stated the continued rhetoric could escalate, ultimately leading to heightened tariffs which could “burden” economic growth and job creation.

Multiple countries have been entangled into the trade conflict. Last week, the Trump administration announced that it would roll out a 25 percent tariff on an additional $16 billion worth of Chinese goods starting August 23. China has responded that it is preparing to retaliate with tariffs on roughly $60 billion worth of U.S. goods, ranging from 5 percent to 25 percent in import taxes. Mexico, Canada, and the European Union have also been dragged into the trade disputes with the U.S.

Gates’ comments follow a warning from the International Monetary Fund that continued tariffs between the U.S. and China could cost the global economy $430 billion, or 0.5 percent of GDP, by 2020. The same report said that although global growth remains strong, the current trade tensions have “clouded” the outlook for the economy.