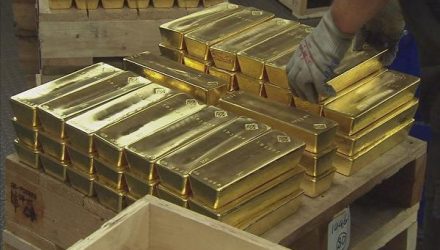 Big Gold ETF Does Something Unusual

The SPDR Gold Shares (NYSEArca: GLD), iShares Gold Trust (NYSEArca: IAU) and other gold-backed exchange traded products are up nearly 3% to start 2018 and some technical analysts see more gains on the way for the yellow metal.

Importantly, January is often one of the best months of the year in which to be long gold. Gold has enjoyed greater demand in a low interest-rate environment as the hard asset becomes more attractive to investors compared to yield-bearing assets. However, traders lose interest in gold when rates rise since the bullion does not produce a yield. Interest rates remain low in many developed markets and some emerging markets have been rapidly lowering borrowing costs this year.

“As investors were consumed with bitcoin’s price action in December, many missed the strong rally in gold. The SPDR Gold Trust ETF (GLD) just snapped its longest winning streak ever,” reports CNBC. “It rallied for 11 straight days before dipping into the red on Wednesday, marking its longest string of positive sessions since its inception in 2004.”

“Not only have we seen data that show an improving global economy, but more importantly, we are also seeing a rise in commodities,” reports CNBC. “We all know about the rise in oil prices over the past six months, but many other commodities such as copper have jumped as well, and that’s worth watching.”