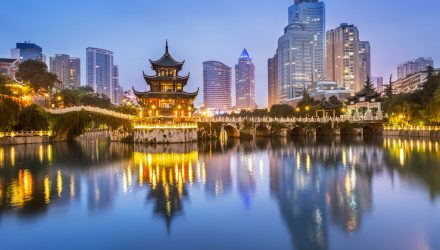 With stocks in developing economies resting at their highest levels in about three years, some investors are apt to ponder the fate of stocks in the largest emerging market – China. The iShares China Large-Cap ETF (NYSEArca: FXI), one of the largest China exchange traded funds listed in the U.S., is up almost 26% year-to-date.

Investors are coming to grips with the fact that China’s economic growth is not what it was during the go-go days of the emerging markets boom. For an economy often deemed as too hot, steady, consistent growth could be what foreign investors really want to see.

“FXI has an average annual return of 8.62% since its inception. As China just been through a stock market crash in 2015, its average annual return in the past 3 and 5 years are only 4.78% and 5.82% respectively. However, its stock market appears to show some signs of recovery lately with a return of 18.91% in the past 1 year,” according to a Seeking Alpha analysis of FXI.