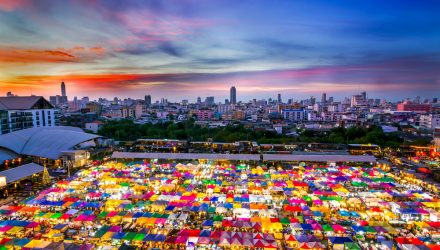 Up more than 28% year-to-date, the iShares MSCI India ETF (BATS: INDA) is one of this year’s best-performing emerging markets single-country exchange traded funds. INDA, also one of the largest India ETFs trading in the U.S., recently saw some interesting activity.

New Delhi projects India’s economy could expand between 6.75% and 7.5% in 2017-18 as the government shifts tactics on its economy. India, Asia’s third-largest economy, is one of the best-performing countries in the MSCI Emerging Markets Index this year.

“Equity investors pulled the largest single-day amount in two years from the main US exchange-traded fund focusing on India. That didn’t stop traders from cutting bearish bets on the ETF to the lowest level since February 2015,” reports Bloomberg.

The iShares MSCI India ETF (BATS: INDA), PowerShares India Portfolio (NYSEArca: PIN) and the WisdomTree India Earnings ETF (NYSE: EPI) have also notched impressive performances this year. India’s market suffered a blow at the end of 2016 after Prime Minister Narendra Modi yanked about 86% of all cash from the economy to fight so-called black money to fight back against the huge shadow economy. While the economy may experience a short-term setback from the move, the results of demonetization could usher in long-term benefits to the economy.

“Markit data on the iShares MSCI India ETF shows a section of the market remains bullish on equities even as Asia’s third-biggest economy grows at the slowest pace since 2014 and valuations hover near a nine-year high. Traders have extinguished about $130 million of bearish bets on the $5.2 billion fund since March, data compiled by Bloomberg show,” according to Bloomberg.