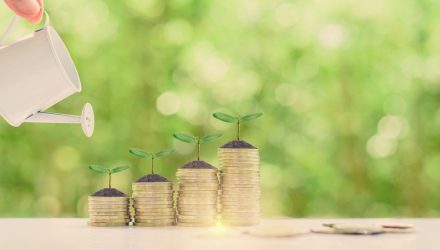 The VanEck Vectors Morningstar Wide Moat ETF (MOAT) isn’t a dedicated value exchange traded fund. It’s not explicitly dedicated to any of the prominent investment factors, but there are times when MOAT will lean toward growth, value, quality, or a mix of all three.

That flexibility is advantageous because MOAT, which tracks the Morningstar Wide Moat Focus Index, is up 23.5% year-to-date as of September 1. That’s 450 basis points ahead of the S&P 500 Value Index.

That doesn’t mean MOAT is void of value plays. Actually, the opposite is true. Several of the fund’s holdings are considered high-quality, undervalued companies with strong management teams. Morningstar’s Susan Dziubinski evaluated such companies, turning up several MOAT components. Amazon (NASDAQ: AMZN) is a prime example.

“We assign Amazon an Exemplary Capital Allocation rating. The rating reflects our assessments of a sound balance sheet, exceptional investments, and appropriate shareholder distributions,” said Morningstar. “We think investments back into the business are most likely to be the key driver of total shareholder returns and are therefore appropriately prioritized over other capital returns such as dividends and buybacks, which Amazon does not offer.”

More to Love with MOAT

Alright, so Amazon is widely known to be a high-quality outfit, and its inclusion in MOAT isn’t surprising. However, some of the fund’s lesser heralded components also turned up on the Morningstar screen.

Look at Compass Minerals International (NYSE: CMP), which is getting a lift from plans to get into lithium production, levering it the electric vehicle boom.

“We are in favor of Compass’ plans to enter lithium production from the lithium in the byproduct of its SOP production. Given that Compass already operates brine ponds and has much of the infrastructure set up, we see a relatively low capital investment to establish lithium production versus new entrants into the industry,” according to Morningstar.

Compass also has an improving balance sheet and the cash flow to cover its dividend obligations.

“Compass’ revenue is subject to moderate cyclicality. However, with few near-term debt maturities over the next few years and the salt business being restored, Compass is not in danger of being unable to meet its financial obligations,” notes Morningstar.

MOAT’s 48 holdings range in weights of just over 1% at the bottom to 3.21% at the top, confirming that single stock risk is benign in the ETF.