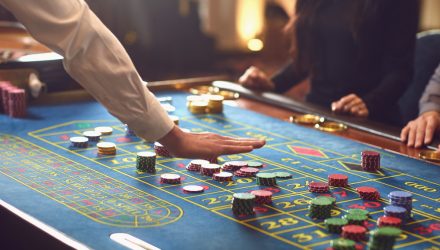 The Casino & Gaming Space Witnesses a Huge Surge in Buyouts

It wasn’t that long ago that the VanEck Vectors Gaming ETF (BJK), the original exchange traded fund focusing on casino equities, was being framed as a play on the reopening trade.

BJK is home to multiple land-based casino operators and that thesis largely paid offer for investors. Over the past year, the VanEck ETF is higher by 30.87%, an advantage of 250 basis points over the S&P 500 Consumer Discretionary Index.

Now, BJK is proving to be an ETF epicenter of a wave of consolidation activity in the gaming industry. August isn’t even two weeks old, yet three BJK components have already acquired competitors.

The ball got rolling last week when VICI Properties (NYSE: VICI) said it’s purchasing rival MGM Growth Properties (NYSE: MGP) for $17.2 billion in equity in a deal creating the largest owner of casino real estate in the U.S. VICI and MGM Growth are two of BJK’s 40 holdings, combining for about 6.4% of the ETF’s weight.

Penn National Gaming (NASDAQ: PENN) – another BJK member firm – said on Aug. 5 it will pay $2 billion in cash and stock for Score Media and Gaming (NASDAQ: SCR) in an effort to get into Canada as that country readies a launch of single-game sports betting.

Earlier this week, DraftKings (NASDAQ: DKNG), BJK’s third-largest holding, said it will pay $1.56 billion in equity for Tilman Fertitta’s Golden Nugget Online Gaming (NASDAQ: GNOG). That’s the company’s third acquisition this year – not counting taking stakes in other entities – and it’s one Wall Street believes will touch off a wave of consolidation in the iGaming space, which could put other BJK components in the spotlight.

Those three transactions aren’t even the entire list of corporate actions involving BJK components. Smaller holding Scientific Games (NASDAQ: SGMS) is in the process of selling its lottery and sports betting units while attempting to acquire the 19% of social casino firm SciPlay (NASDAQ: SCPL) it doesn’t already own.

On Tuesday, Flutter Entertainment (OTC: PDYPY), which is BJK’s largest holding at a weight of nearly 9%, said its FanDuel unit controls 45% of the U.S. online sports betting market. The UK-based operator is eyeing a 2022 spinoff of part of FanDuel.

As for big-time mergers and acquisitions in this industry, MGM Resorts International (NYSE: MGM) tried to acquire Entain Plc (OTC: GMVHY) in January for $11.06 billion, but was turned away. Today, MGM has even more cash to work with and could be compelled to make another offer for Entain, its partner on the BetMGM venture.