You are at:Home»Beyond Basic Beta Channel»Short Squeezes in Energy Could Actually Propel This ETF 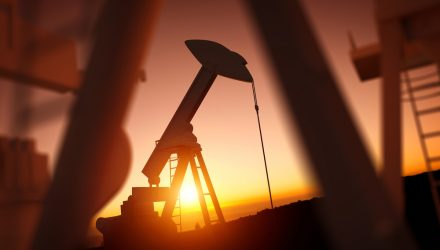 Short Squeezes in Energy Could Actually Propel This ETF

The VanEck Vectors Oil Services ETF (NYSEArca: OIH) is retreating due to a sharp pullback in oil prices, but the famed oil services exchange traded fund could be primed for a rebound.

There’s no denying that the proliferation of COVID-19 cases around the world due to the new delta variant is hampering oil prices. A recent decision by the Organization of Petroleum Exporting Countries (OPEC) to boost output to take advantage of higher prices isn’t helping the near-term cases for crude oil either.

However, some analysts see the energy sector’s recent retrenchment as a case of too much too soon, noting that some stocks in the group may be coming detached from solid fundamentals, such as improving balance sheets and rising cash flow.

There is “increasing potential for a sharp short squeeze and move higher, given its extreme disconnect from oil fundamentals,” JPMorgan strategists led by Dubravko Lakos-Bujas said in a note cited by MarketWatch.

The bank considers energy among the cyclical groups that are currently “buys.” Other reopening fare, such as retailers and travel leisure names, also joined that list.

Where Do Crude Prices Go from Here?

Oil services stocks, including OIH components, are tightly correlated to West Texas Intermediate price action. With the benchmark domestic oil contract faltering of late, OIH is proving vulnerable, but that decline could be luring in bearish traders, potentially setting the stage for the aforementioned short squeeze.

Short squeezes arrive when bearish traders are forced to rapidly unwind those bets, boosting the underlying security in the process. These scenarios are usually good for some near-term fundamentals, but aren’t reflective of fundamentals.

“JPMorgan also sees oil prices likely jumping to $80 per barrel by the end of this year due to rising demand and muted supply additions, Barron’s reports, citing a note from the bank’s analysts,” reports Tsvetana Paraskova for OilPrice.com. “Goldman Sachs also sticks to its $80 oil forecast for later this year, and even said that the OPEC+ deal adds a $2 a barrel upside to that outlook.”

In an interesting turn of events, JPMorgan notes the environmental, social, and governance (ESG) movement is leading to reduced oil output capacity faster than renewables can fill that void, providing support for oil prices in the process.