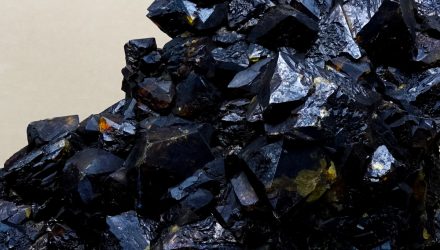 Rare earths and the VanEck Vectors Rare Earth/Strategic Metals ETF (REMX) are in the spotlight, and not just because demand is soaring for a hot new tech gadget.

Rather, these essential minerals, which are used to produce an array of consumer and military products, are receiving renewed attention because of the U.S. departure from Afghanistan. That opens the door for China, which already controls more than 80% of the global rare earths market, to potentially access Afghanistan’s estimated $1 trillion in rare earths reserves.

Looked through the lens of investment implications, it’s not surprising that VanEck’s REMX is up nearly 10% over the past week.

When it debuted nearly 11 years ago, REMX was derided by some naysayers as being too narrowly focused and too thematic. Today, it’s flirting with $1 billion in assets under management, sporting a price tag north of $100 and up 69.1% year-to-date — all points highlighting the importance of rare earths on the global stage.

As the situation in Afghanistan proves, rare earths carry geopolitical implications, and the U.S. would like to reduce dependence on foreign sources (China) for these materials. The Defense Department previously attempted to stockpile rare earths, and Congress is getting involved in an effort to rejuvenate domestic rare earths mining with last week’s introduction of the Rare Earth Magnet Manufacturing Production Tax Credit Act of 2021.

Underscoring how far behind in the rare earths race the U.S. has fallen, the world’s largest economy represents just 12.45% of REMX’s geographic weight as of July 31, while China sits at 47.28%, according to issuer data. None of REMX’s top 10 holdings, a group that combines for roughly two-thirds of the fund’s roster, are US-listed firms.

There are some other bipartisan efforts to help the U.S. rare earths industry. The “’Reclaiming American Rare Earths (RARE) Act,’ introduced in April, would amend federal tax law and put in place permanent tax deductions for the domestic mining of critical minerals including rare earths,” according to Quartz.

On Capitol Hill, things always take time to shake out, but if the U.S. asserts itself on the rare earths stage, that could actually benefit REMX if the fund’s US-based holdings are able to bring more supply to market.