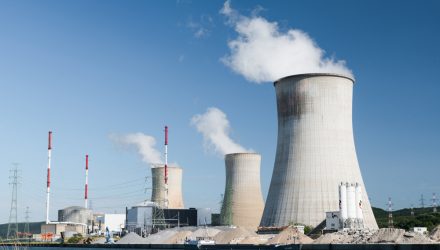 NLR Worthy of Another Look Amid Nuclear’s Transition

California is planning to close its last nuclear power plant, but investors shouldn’t perceive that as a slight on uranium equities and the broader nuclear energy investment thesis.

In fact, nuclear and uranium equities are soaring this year, and the VanEck Vectors Uranium+Nuclear Energy ETF (NLR) is higher by nearly 12%. That underscores the increasing prominence of nuclear energy.

NLR, which tracks the MVIS Global Uranium & Nuclear Energy Index, is experiencing a rebirth of sorts for credible reasons. More governments are taking the viewpoint that nuclear energy is clean energy. For those that don’t want to explore nuclear expansion, the fact is that the source can still play an important role in plugging gaps as more countries transition away from fossil fuels to renewable sources.

“Small scale nuclear companies are picking up pace, following the example of bigger nuclear firms looking for their place in future of renewables, as nuclear power finally makes a comeback following years of criticism and fear of power stations,” reports Felicity Bradstock for OilPrice.com.

The relevance of nuclear energy — and thereby NLR’s relevance as an investment destination — is increasing because market participants are starting to believe that transitioning to wind and solar too rapidly causes problems. Just look at the natural gas crunch Europe is facing and the power outages suffered by some US states in recent years. On the other hand, nuclear power can ease that transition and does so without increasing carbon footprints.

“Small nuclear plants may be able to bridge the gap in energy output that wind and solar energy production faces. When there is a lull in renewable energy production, small-scale nuclear power could plug the gap in a way that is not possible for larger nuclear projects to do due to their high cost to energy value,” according to OilPrice.com.

Adding to the case for NLR is the fact that some countries are warming to the idea of more nuclear use. For example, the UK recently said nuclear will play a prime role in ensuring its power grid will be free of fossil fuels by 2035.

Here in the US, some smaller nuclear projects are in the works in Wyoming. While that’s just one state, the plans show that there’s appetite for nuclear power and that more governments like its green energy credentials. That could be a positive for NLR going forward.