You are at:Home»Beyond Basic Beta Channel»Looking for the Best of BDCs? Consider ‘BIZD’ 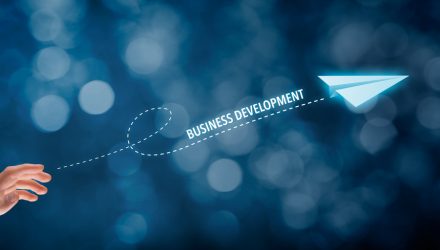 Looking for the Best of BDCs? Consider ‘BIZD’

With interest rates still low, an assortment of traditional income-generating assets just aren’t getting the job done for many income investors. That puts alternative assets in the spotlight, including business development companies (BDCs).

Investors not familiar with BDCs but still enticed by the big yields lobbed by the asset class can get involved with the VanEck Vectors BDC Income ETF (NYSEArca: BIZD). BIZD, which sports an eye-catching 30-day SEC yield of 7.69%, follows the MVIS US Business Development Companies Index.

For the uninitiated, BDCs fill important voids left open by traditional banks. BDCs typically lend to small and medium businesses and help those enterprises raise other financing, including debt and equity. The outfits BDCs engage with have needs for capital, but those needs usually aren’t compelling for old-school banks, many of which have slowed loan growth over the past few years.

An instrument like BIZD is useful on other fronts, particularly in today’s climate. BDCs enjoy tax treatment comparable to real estate investment trusts (REITs), meaning that in exchange for favorable tax treatment, BDCs must dole out at least 90% of profits in the form of dividends.

The $444.4 million BIZD has 26 components with weights ranging from 1.72% to 9.19%, according to issuer data. Some BDC experts see opportunities among the BIZD lineup, including with FS KKR Capital (FSK), a provider of mid-market financing.

“One potential catalyst going forward is a recently approved merger with FS KKR Capital II (FSKR), which makes sense for a number of reasons, primarily that they share the same advisor and have similar investment portfolios. The deal should close in mid-June, creating the market’s second-largest BDC and providing both scale and leverage benefits,” writes Brett Owens for Forbes.

Those two stocks combine for 10% of the BIZD portfolio. Another BIZD holding, Hercules Capital (HTGC), doesn’t just offer a big yield. Its inclusion in the fund offers investors indirect exposure to disruptive growth companies because Hercules has been a major provider of financing to such firms. Companies Hercules is an investor in include Bicycle Therapeutics and plant-based meat producer Impossible.

“Among the reasons to love HTGC are credit quality that’s both at decade-long highs and improving, record-high commitments of $531 million last quarter amid a wider feeding frenzy in venture capital deals, and a recent institutional private credit fund that could provide additional dividend income in roughly two years,” according to Forbes.

Hercules Capital commands a weight of almost 5% in BIZD.