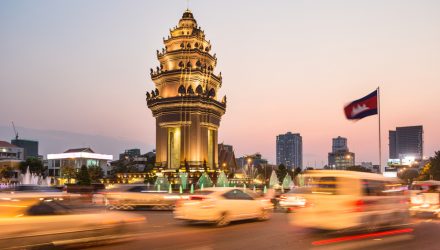 It Pays to Be Diversified with Emerging Markets Bonds

With Treasury yields still hovering around rock-bottom levels, international bonds may be alluring to income investors.

EMAG follows the MVIS EM Aggregate Bond Index, which includes dollar- and euro-denominated bonds as well as local currency debt. The fund’s 325 holdings include investment-grade and junk-rated bonds. EMAG, which recently turned 10 years old, yields 3.39%, but its geographic diversification could resonate with investors, particularly at a time when bonds are surprisingly volatile in some developing economies.

Just look at China, where an intensifying regulatory crackdown is pressuring stocks and bonds aren’t offering much shelter from that storm.

“Against this backdrop, the upcoming release of China’s activity gauges (PMIs) would be of utmost importance because of their potential to reinforce or undermine China’s 2021 growth story. The consensus forecast for 2021 GDP growth is still unchanged at 8.5%, despite tighter regulations in real estate, tech sectors, and new mobility restrictions/virus outbreaks. Weaker than expected PMIs could become the proverbial straw that broke the camel’s back,” notes VanEck Chief Economist, emerging markets, Natalia Gurushina.

Further highlighting the advantages of EMGA’s geographic diversity is that some emerging markets central banks are raising interest rates to guard against inflation, but the VanEck ETF isn’t excessively allocated to those countries.

Plus, as Gurushina points out, there are some pockets of good news in developing economies.

“Across the globe, South Africa’s public sector unions agreed to the government’s wage increase proposal that was already budgeted. This is excellent news, given that the recent deadly riots led to the extension of fiscal support.  We watch South Africa’s developments with interest because the riots opened the door for political changes, especially regarding the balance of forces inside the ANC and between the ANC and other political actors. Moving away from the ANC infighting and improving South Africa’s fiscal and growth trajectories would be a real game-changer (both for equities and bonds),” she writes.

South Africa accounts for 5% of the EMAG roster, making it the number five geographic weight in the fund.