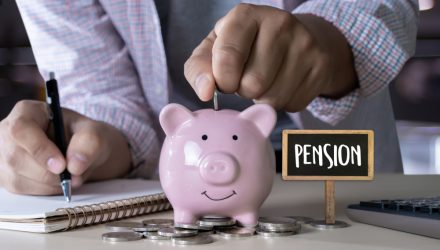 On the back of surprisingly strong tax collection, state and local finances are solidifying and that’s constructive for municipal bonds.

The VanEck Vectors CEF Municipal Income ETF (XMPT) is higher by nearly 2% over the past month, an impressive feat in that time frame for a municipal bond exchange traded fund. The $194.5 million XMPT, which is just a few weeks away from its tenth anniversary, follows the S-Network Municipal Bond Closed-End Fund Index. That benchmark is a basket of closed-end municipal bond funds focusing on dollar-denominated tax-exempt debt.

For investors considering XMPT and other muni bond ETFs, it’s encouraging that states and cities are thriving on the tax collection front. Another positive is that public pension returns are perking up.

“With under a month left until their fiscal 2021 year end on 30 June, many US public pension systems are on pace to post exceptional, and potentially record-setting investment returns,” according to Moody’s Investors Service. “Such strong investment returns would broadly improve near-term funding, lessen negative non-investment cash flow (NICF) relative to retirement system assets and provide governments with a respite from growth in annual costs.”

Why It’s Important to XMPT

Many novice muni bond investors may be apt to simply assess a state’s economic health when venturing into individual issuers or funds such as XMPT, but public pension health is vital to investor outcomes in this asset class as well.

Several state public pension systems, including CalPERS and CalSTRS, are among the largest pension investors in the world. Additionally, some states are grappling with the scenario of lavish benefits to plan participants that guaranteed young retirement ages (in some cases in a worker’s early 50s) and increasingly long life expectancies.

Municipalities can issue pension obligation bonds (POBs) to fill shortfalls in their contributions to public pension systems, but too much of that type of issuance can prompt rising pension risk, potentially leading to downgrades or higher interest rates on new issues. Over the near-term, those ominous scenarios don’t appear to be cause for concern for investors considering XMPT.

“With the 30 June fiscal year end for many US public pension systems, we project that investment returns are approaching 25%-30%for many if market conditions maintain their strength in the coming weeks, based on our composite of market indices meant to represent typical US public pension system asset allocations,” adds Moody’s.

XMPT, which yields 3.89%, is up 6.06% year-to-date, an advantage of nearly 400 basis points over the widely followed S&P National AMT-Free Municipal Bond Index.