You are at:Home»Beyond Basic Beta Channel»GRNB Could Heat Up as Green Bond Sales Flirt with Records 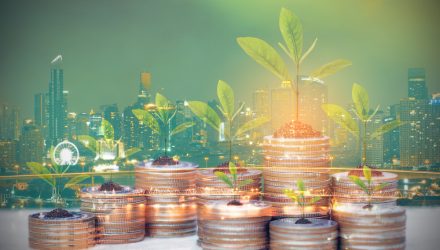 GRNB Could Heat Up as Green Bond Sales Flirt with Records

With more and more nations entering the green bond market, the VanEck Vectors Green Bond ETF (NYSEArca: GRNB) is ready for its close-up.

It remains to be seen if the S&P Green Bond U.S. Dollar Select Index and thereby GRNB increase in terms of number of issues over the near-term, but what is clear is that more green bonds are coming to market. This week, Germany, one of the largest issuers of environmentally friendly, is expected to float a 10-year issue while Colombia, Spain, and the U.K. are poised to make their green bond market debuts. More big issues are on the way.

“All that will soon be dwarfed as the European Union prepares to enter the market, with 30% of its 800 billion-euro ($950 billion) pandemic recovery funding slated for green projects. The bloc will hold a call Wednesday with investors to give more details on its plans,” reports Bloomberg.

Reflecting Europe’s status as one of the epicenters of green bond issuance, eight of the continent’s countries are members of the GRNB lineup. The planned spate of issuance adds to what’s already been a brisk pace of green debt sales this year.

“Sovereign green sales in September could be at least 20 billion euros, according to Imogen Bachra, a rates strategist at NatWest Markets. That would test the current monthly all-time high, set in March when Italy made a record-breaking debut and top issuer France sold more debt,” according to Bloomberg.

Germany and France, the Eurozone’s two largest economies, are among the European nations represented in GRNB. Poland was the first government to issue green bonds, doing so in 2016. Since then, sovereign issuance of this form of debt took off in significant fashion.

“Governments from around the world sold $39.1 billion in green bonds so far this year, already surpassing a total of $37.5 billion in all of 2020,” reports Bloomberg.

With more global governments becoming active in the fight against climate change while racing to reach carbon-neutral goals, it’s possible that GRNB’s lineup increases in the years ahead. The ETF has an effective duration of 5.79 years, and more than three-quarters of its holdings carry investment-grade ratings.