You are at:Home»Beyond Basic Beta Channel»Going Green Could Be the Next Big Thing in Municipal Bonds 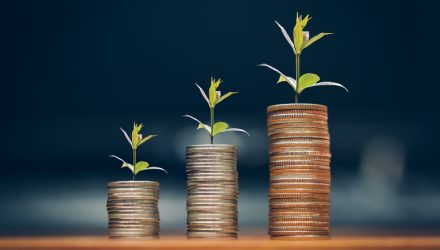 Going Green Could Be the Next Big Thing in Municipal Bonds

The municipal bond market is one of the largest segments of the overall bond market, and it’s a favored destination for investors seeking steady, low-risk income.

Muni bonds are not, however, often thought of as creative or inventive. That could be changing, and could carry with it implications for the VanEck Vectors Green Bond ETF (NYSEArca: GRNB). GRNB, the original exchange traded fund focusing on green bonds, currently doesn’t feature much exposure to government debt, just 5.8% according to issuer data, but that figure could increase over time.

“While dozens of green-bond strategies have emerged over the last several years, significantly fewer have arisen with a specific focus on the municipal market,” writes Morningstar analyst Gabriel Denis. “This may be surprising for some given that the U.S. muni market, where many issuers have been offering debt that supports environmentally responsible infrastructure projects for decades, appears a natural fit for green bonds.”

Green Space in the Muni Arena

Green bonds are a small, but growing part of the fixed income market. Explaining that growth and investors’ increasing enthusiasm for such debt, green bonds are issued by companies or governments for the sole purpose of funding environmentally friendly projects.

For example, a state that wants to develop a new wind farm can issue green bonds to that effect, and it’s possible those bonds will eventually be included in GRNB’s roster.

“The green-bond market within the U.S. has grown quite rapidly over the last few years. According to the Climate Bond Initiative, a nonprofit that certifies green bonds, total U.S. green-bond issuance grew from $12.8 billion over the 2015 calendar year to $61.5 billion over 2020,” adds Denis.

The bulk of green bonds are taxable issues from companies, essentially making those bonds corporate debt, but last year, green munis accounted for almost a third of the market – a figure that’s forecast to grow alongside the broader green debt arena. As that happens, GRNB’s muni exposure could increase.

If that happens, it would jibe with GRNB’s mostly low-risk roster. Over three-quarters of the fund’s holdings carry investment-grade ratings and of that group, over 51% are rated AAA, AA, or A, confirming robust credit quality and low credit risk.

“The green-bond market within the U.S. has grown quite rapidly over the last few years. According to the Climate Bond Initiative, a nonprofit that certifies green bonds, total U.S. green-bond issuance grew from $12.8 billion over the 2015 calendar year to $61.5 billion over 2020,” concludes Morningstar’s Denis.