You are at:Home»Beyond Basic Beta Channel»Green Bonds Have Premiums and That’s Only the Beginning 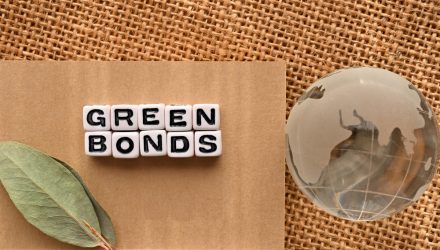 Green Bonds Have Premiums and That’s Only the Beginning

The green bond market is still in its early innings, and the same goes for the VanEck Vectors Green Bond ETF (NYSEArca: GRNB), but it’s clear that momentum is building in this space.

Adding to the case for GRNB, which is just four and a half years old, is the point that green bond momentum is built on a foundation of credible momentum. For example, companies issued $200 billion of green debt earlier this year, and 2021 issuance of green bonds has already eclipsed the annual record.

Green bond issuance could continue swelling because, as research by the Climate Bonds Initiative (CBI) suggests, there are benefits to selling this form of debt.

“Companies issuing green bonds continue to gain funding cost advantages compared to their vanilla debt, according to new research, and industry players do not foresee this so-called greenium going away anytime soon,” according to S&P Global Market Intelligence.

As S&P Global notes, the CBI evaluated 75 green bonds, constructing yields curves for 33 of those issues. 11 priced inside their yield curves while another 15 priced right on their curves, indicating that some green bonds are just as or more cost-effective than traditional corporate debt. That’s particularly true of dollar-denominated green bonds.

That’s relevant to the GRNB thesis because nearly all of the exchange traded fund’s 291 holdings are denominated in dollars. The S&P Green Bond U.S. Dollar Select Index, GRNB’s underlying index, only holds dollar-denominated bonds, including corporate, government, and supernational fare.

The need for more capital to fund renewable energy projects coupled with strong investor demand could drive increases in green debt issuance, and there are benefits for issuers, too. Research by ING indicates that global green debt issuers realize savings of one to 10 basis points on green bond sales relative to traditional corporate debt.