You are at:Home»Beyond Basic Beta Channel»Going Green with Bonds? Stick with One of the Originals 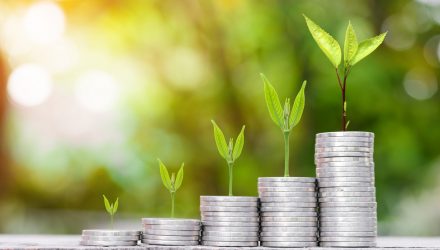 Going Green with Bonds? Stick with One of the Originals

As more investors become climate-aware and demand strategies to that effect, fund issuers are responding in turn. Yet it’s taking awhile to get more green coverage in the world of fixed income exchange traded funds.

In other words, there’s no greenwashing here. Companies and governments whose bonds are found on the GRNB roster issue that debt explicitly for environmentally sound projects.

Green bonds are a small but growing part of the overall bond market. In the U.S. alone there’s ample room for growth in this asset class, due in large part to the dominance of Uncle Sam in terms of bond issuance and supply.

“Perhaps the greatest challenge facing investors wanting to fold ESG criteria into their bond portfolios is the makeup of the bond market itself,” says Morningstar analyst Neal Kosciulek. “As of the first quarter of 2021, U.S. Treasuries accounted for about 40% of market value of the total U.S. bond market, as measured by the Securities Industry and Financial Markets Association. Another 20% of the market comprised securitized bonds issued by Ginnie Mae, Fannie Mae, or Freddie Mac. Consequently, about 60% of the U.S. bond market points back to a single issuer: the United States government.”

Looked at differently, GRNB and its roster of 284 green bonds can act as ideal diversification tools for fixed income portfolios that are currently heavy on U.S. government bonds. Plus, with over 90% of its holdings classified as non-governments bonds, GRNB presents investors with more credit opportunities than standard aggregate bond funds.

However, credit risk isn’t alarming in GRNB as over three-quarters of its components carry investment-grade ratings and over half of those bonds are rated AAA, AA, or A.