You are at:Home»Beyond Basic Beta Channel»Gambling ETF Is Ready for Some Football 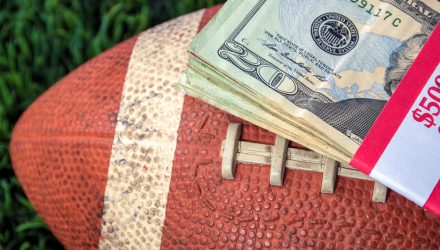 Gambling ETF Is Ready for Some Football

This week brings the second week of the 2021 NFL campaign and the third week of college football. With that in mind, it may not be surprising that the VanEck Vectors Gaming ETF (BJK) is higher by about 6% over the past month.

BJK is the original exchange traded fund focusing on casino equities, but it’s evolving along with the industry it provides exposure to. These days, it’s all about iGaming, or online casinos, and sports betting in the wagering industry.

BJK, which turns 14 years old in January, is home to 40 stocks, several of which are dedicated iGaming and sports wagering plays, and that doesn’t include the ETF’s exposure to casino operators that have increasingly hefty sports wagering footprints. That latter group includes Caesars Entertainment (NASDAQ:CZR) and Penn National Gaming (NASDAQ:PENN).

“iGaming names have rallied during the last month, and we expect this to continue as investors become more comfortable with upcoming revenue estimates given aggressive marketing, superior product and overall better media/betting integration,” Macquarie’s Chad Beynon said in a recent note.

Macquarie has “outperform” ratings on nine sports betting and iGaming stocks. That group includes Caesars, DraftKings (NASDAQ:DKNG), MGM Resorts International (NYSE:MGM), and Penn National. Those stocks combine for over 21% of BJK’s weight, according to issuer data.

Good Time to Bet on BJK

Seasonal trends need to be confirmed by other indicators, but as BJK’s recent price action suggests, there’s no denying that the arrival of football season could be a plus for sports wagering equities, including BJK components.

“We estimate that football accounts for 35-40 percent of the annual revs, although most of this comes in 4Q (~33 percent of annual revs),” said Beynon.

The fourth quarter also brings college bowl games as well as the starts of the NBA and college basketball. In the U.S., basketball is the next-most wagered-on sport after football.

In addition to favorable seasonal dynamics, BJK could be worth monitoring due to increasing consolidation in the iGaming and sports betting industries.

“Tribal operators such as Hard Rock Digital could be another consolidating force. Bottom line, we believe consolidation in the industry is not over, a notion that was echoed by MGM CFO Jonathan Halkyard at a dinner we recently hosted,” said Beynon.

Speculation is running rampant that MGM will make another offer for Entain Plc (OTC:GMVHY), its partner on the BetMGM business. Those stocks combine for almost 10% of BJK’s weight.