You are at:Home»Beyond Basic Beta Channel»Companies Are Gobbling up Bitcoin at Rapid Rate 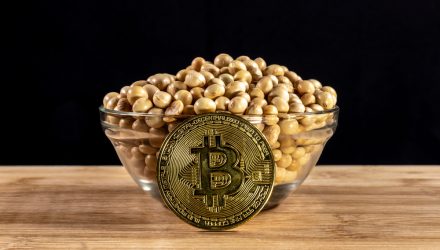 Companies Are Gobbling up Bitcoin at Rapid Rate

More companies are holding Bitcoin on their balance sheets. In fact, corporations doing just that account for a significant chunk of mined bitcoin, and that could be a long-ranging positive for exchange traded funds, including the VanEck Vectors Digital Transformation ETF (DAPP).

DAPP, which is one of this year’s rookie ETFs, is an equity-based fund, but many of its 25 member firms are more levered to Bitcoin and Ethereum price action than broader equity benchmarks. That’s relevant at a time of rising corporate crypto adoption.

New data from Bitcoin Treasuries confirm companies own 1.66 million bitcoin, or nearly 8% of supply. The hard cap on output of the largest digital currency is around 21 million.

“MicroStrategy leads the way with 108,991 bitcoin being held, around half percent of the total supply, representing a whopping 75% of the software intelligence company’s total market capitalization,” reports Bitcoin Magazine.

MicroStrategy is such a devoted buyer of bitcoin that the company has, in multiple instances, issued corporate debt to add to its holdings in the digital currency. The stock is the fourth-largest in DAPP at a weight of 6.41%, according to issuer data.

In terms of corporate Bitcoin holdings, Elon Musk’s Tesla (NASDAQ:TSLA) is number two behind MicroStrategy. The electric vehicle maker isn’t a member of the DAPP lineup, but several of the next biggest corporate owners of Bitcoin are.

“The electric car maker is followed by Square, Marathon Digital Holdings, and Coinbase. The fintech payment solutions firm holds a little over eight thousand BTC, whereas the bitcoin miner MARA has allocated 5,425 bitcoin to its balance sheet. Coinbase, the largest U.S. exchange, closes up the top five with a shy 4,487 bitcoin bag,” according to Bitcoin Magazine.

Hut 8 Mining (NASDAQ:HUT) and Riot Blockchain (NASDAQ:RIOT) are also among the top corporate owners of Bitcoin. Those stocks combine for over 10% of the DAPP roster.

What’s notable about corporate adoption of Bitcoin in this form is that it’s a new phenomenon. Adding Bitcoin to a balance sheet is a very 2020-21 idea, indicating that more growth could be had on this front, potentially benefiting DAPP in the process.

“As more firms realize what Bitcoin actually is and its unique possibilities in the upcoming years, the race is set to heat up significantly, further drying up supply in the market. And while they don’t realize that, the Bitcoin plebs can enjoy stacking sats consistently at lower prices,” adds Bitcoin Magazine.