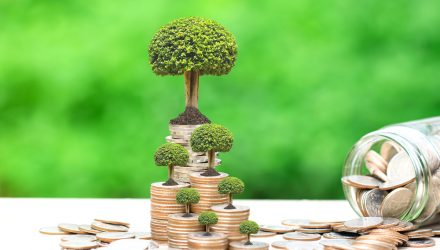 Demand for Treasuries is understandably muted at the moment, and with the rest of the domestic bond market slumping, options are limited for fixed income investors.

Making matters worse is the point that the U.S. is far from the only slumping bond market this year. Global funds aren’t providing investors with much, if any, shelter from the storm. However, data suggest demand for green bonds is perking, indicating the VanEck Green Bond ETF (NYSEArca: GRNB) could be a fixed income exchange traded fund worthy of evaluation.

GRNB, which tracks the S&P Green Bond U.S. Dollar Select Index, is down year-to-date, but that negative performance could belie opportunity with green bonds. Additionally, data confirm some investors remain enthusiastic about this still young corner of the global bond market. Sales of green debt increased in August and September.

“Companies and governments around the world raised more than $54 billion in green bonds last month, compared with more than $35 billion raised in August, data compiled by Bloomberg show. That’s despite overall bond issuance in the U.S. and Europe dropping significantly in September as central banks across the globe stepped up their battle against inflation,” reports David Caleb Mutua for Bloomberg.

GRNB could be an attractive option for bargain-hunting bond investors beyond the fact that global bond markets are slumping this year. Demand for fixed income assets adhering to environmental, social, and governance (ESG) strategies is growing, but with that rising demand comes an elevated desire for straightforward products free of greenwashing concerns.

GRNB checks that box because green bonds can only be issued for, well, green purposes. For example, a city government needing to finance a new solar panel system that costs $200 million can sell $200 million in bonds and credibly call that debt “green.”

“Green bonds not only attract environmental, social, and governance-friendly investors but could also appeal to other investors who may buy such debt because the issuer is familiar to them. Bond deals that appeal to the widest portion of the investor base during volatile markets tend to have the most success, which partly explains the up-tick in green bond issuance, according to Andrew Karp, head of global corporate and investment banking ESG advisory and financing solutions at Bank of America Corp.,” according to Bloomberg.

Europe remains one of the leading regions in terms of green bond issuance. GRNB reflects as much as it holds Dutch, German, and British green debt, among others.