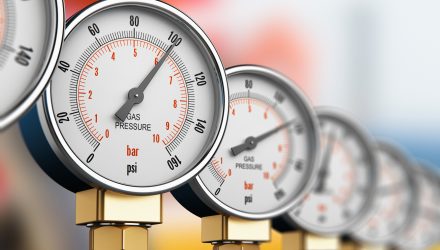 Behind The Natural Gas ETF Surge

Weather forecasts project warm temperatures in the latter part of January will quickly give way to a wave of bitter cold from the Midwest down to Texas and eastward as a high-pressure ridge over Alaska sets course to blow arctic air down through North America.

UNG “has rallied more than 18% from its Jan. 4 closing price (on a split-adjusted basis), ushered along by support at its now-steeply ascending 10-day and 20-day moving averages. Notably, the natural gas tracker early last week gapped above its 126-day trendline (equivalent to half a year’s worth of trading days), which had previously rejected several rally attempts throughout 2017,” according to Schaeffer’s Investment Research.

Natural gas futures strengthened as traders reacted to bullish weather forecasts for most of the U.S. over the next coming weeks, which should fuel heating demand. Natgas prices typically rise ahead of the winter as colder weather adds to heating demand, with November through March as the peak period for U.S. gas consumption, according to Investing.com.