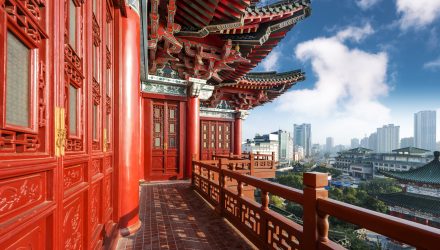 Emerging markets stocks and the corresponding ETFs are struggling and China is a big reason why. The iShares China Large-Cap ETF (NYSEArca: FXI), one of the largest China ETFs trading in New York, is down more than 6% year-to-date.

Meanwhile, the yuan currency continued to weaken against the U.S. dollar. The yuan was trading near an eight-month low after depreciating by a record in June. Furthermore, Beijing’s efforts to deleverage through new regulation while maintaining economic growth has also put pressure on the markets.

Tariff talk and trade war speculation are among the factors plaguing stocks in the world’s second-largest and motivating some traders to get bearish on FXI.

By midday last Friday, “nearly 64,000 puts have traded on FXI, 1.3 times what’s typically seen at this point in the day, and double the number of calls that have traded. Trade-Alert highlights a block of 14,000 October 40 puts that was likely bought to open for about $1.13 million (number of contracts * $0.81 premium paid * 100 shares per contract),” according to Schaeffer’s Investment Research.

After tumbling more than 10% over the past month, the definition of a correction, FXI resides about 9% below its 200-day moving average.

“Shorter-term traders, on the other hand, are more call-skewed than usual toward the exchange-traded fund (ETF). FXI’s Schaeffer’s put/call open interest ratio (SOIR) of 0.78 ranks in the 3rd annul percentile. The July 48 strike is home to peak call open interest of 96,742 contracts in the front-month series, and data from the major options exchanges points to significant buy-to-open activity back on June 1 when FXI was trading north of $47,” notes Schaeffer’s.