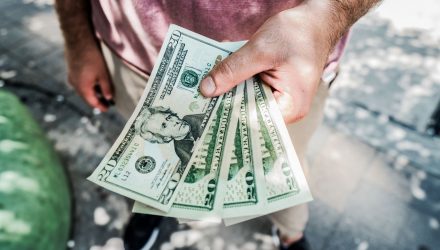 After slumping 9.1% last year, the PowerShares DB U.S. Dollar Index Bullish Fund (NYSEArca: UUP), the exchange traded fund proxy for the U.S. Dollar Index (DXY), is off to a sour start in 2018 with a loss of about 3.5%.

UUP tracks movements against a basket of currencies including euro, Japanese yen, British pound, Canadian dollar, Swedish krona and Swiss franc. The ETF’s struggles to start 2018 are prompting some traders to boost bearish positions on the fund.

“Against this backdrop, the PowerShares DB US Dollar Index Bullish Fund (UUP) is pacing for a seventh straight weekly loss — something that’s happened just one other time in history — and option bears are coming out of the woodwork,” said Schaeffer’s Investment Research. “Since touching a post-financial crisis high of $26.83 in January 2017, it’s been mostly downhill for the UUP exchange-traded fund (ETF). The fund suffered a steady slide through the first three quarters of 2017, and a fourth-quarter rebound attempt was halted by its 32-week moving average.”

Obviously, UUP’s slack year-to-date showing indicates shorting the dollar has been the right way to play the U.S. currency. The dollar slumped last year even as the Federal Reserve raised interest rates three times and the currency is tumbling against this year even amid expectations calling for another round of rate hikes.