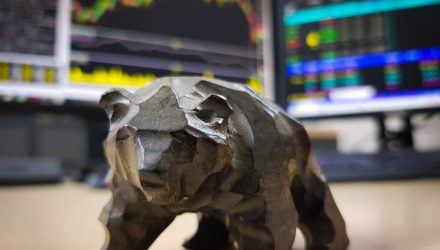 Bearish ETF Strategies to Hedge Against the Fed Outlook

As traders readjust for a more bearish outlook in the wake of the Federal Reserve’s hawkish stance, exchange traded fund investors could turn to inverse or short alternative strategies to hedge further market risks.

For instance, traders funneled $154.4 million into the ProShares Short S&P500 (SH), which takes a simple inverse or -100% daily performance of the S&P 500 index, in the previous session, the largest single-day inflow for the bearish ETF since April 2020, according to Bloomberg.

U.S. equities have retreated in the wake of a risk-off sentiment after Fed Chairman Jerome Powell’s speech at Jackson Hole, Wyoming on Friday where he warned that the central bank will continue to hike interest rates until inflation is properly under control, even at the cost of a potential economic recession.

“Federal Reserve speakers are stressing that the central bank will not pivot away from tightening anytime soon,” Quincy Krosby, chief global strategist at LPL Financial, told the Wall Street Journal. “The question now is how much pain the Fed will deliver, and how long it will take to bring down inflation. The market is trying to find an equilibrium with where stocks should be valued based on those expectations.”

Powell’s statement ended hopes of more modest rate hikes with an eventual pivot or end to monetary policy tightening, which would have signaled a turning point to the more downbeat market projections.

“It’s been a rough go since Chairman Powell’s speech at Jackson Hole, we had that huge down day and there was some maybe hope that maybe the market would stabilize a bit, but just every little bounce has been met with selling pressure,” Yung-Yu Ma, chief investment strategist at BMO Wealth Management, told Reuters.

“The market is kind of shifting back to the macro picture, which is now sort of recalibrated to the expectation of more Fed hawkishness and the idea that the economy could slow more than anticipated, even the question about corporate profits is back on the table.”