You are at:Home»Featured»Bearish ETF Strategies to Hedge Against More Pain Ahead 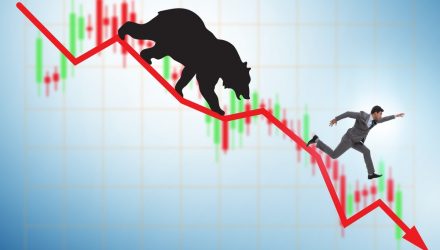 Bearish ETF Strategies to Hedge Against More Pain Ahead

As major Wall Street Banks warn of further pain ahead after the markets suffered their worst one-day loss in two years, investors can turn to bearish or inverse exchange traded fund strategies to hedge any further downside risks.

Barclays strategists warned that margins for U.S. companies and their forward earnings were still under pressure from a combination of economic weakness in China following the COVID lockdowns, the war in Ukraine, and the U.S. Federal Reserve’s hawkish stance, Reuters reports.

“Given the numerous negative near-term catalysts for the SPX we believe that the risks remain firmly stacked to the downside,” Barclays strategists said in a note, referring to the S&P 500.

The underwhelming earnings season results among the high-flying FAANG group, including Facebook’s Meta Platforms, Apple, Amazon.com, Netflix, and Alphabet, were a major contributing factor of weakness, according to Barclays. The results were also seen as the largest negative contributor to the broader index in seven years.

Barclays also noted that fiscal stimulus from the post-pandemic recovery efforts fueled record consumption of goods as consumers spent during lockdowns, which translated to strong corporate earnings in the past two years. However, consumer spending has shifted to services, so support for corporate earnings would not be so strong.

In addition, Goldman Sachs strategists warned of a 35% probability of the U.S. economy falling into a recession over the next two years, adding that the rotation out of some categories of shares and into others suggested that investors were pricing in even greater odds of a downturn.