You are at:Home»Featured»Bank ETFs Started 2022 on the Right Foot 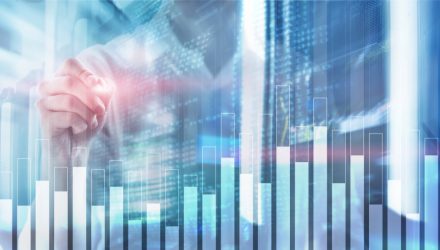 Bank stocks and related exchange traded funds are off to their best start in a decade as a more hawkish Federal Reserve helped support the sector’s momentum.

Bank stocks are enjoying the best start to a new year in over a decade after just ending their best annual performance since 2013, Bloomberg reports.

The KBW Bank Index, which follows 24 of the largest U.S. lenders and acts as the underlying benchmark for the Invesco KBW Bank ETF (NASDAQ: KBWB), gained about 10% so far this week, on pace for its biggest-ever five-day gain to start a new year.

Investors are favoring bank shares amid rises in U.S. bond yields on growing bets that the Fed could begin to hike interest rates as soon as March, with more to come later this year.

A rising rate environment and improving loan growth amid an expanding economy are “the two biggest catalysts for investors to become more bullish on bank stocks,” Raymond James analysts including Wally Wallace and David Long write in a note.

This week rally in bank stocks also received an extra boost on Wednesday after the Fed’s latest minutes showed policy makers discussing the possibility of a stronger economy and elevated inflation, which would require the central bank to hike rates earlier and faster than previously anticipated.

However, after the recent run-up in bank stocks, some warn of pricier valuations in the group.

“The rush to grab rate exposure has resulted in outperformance in the super-regional names this week, and it’s just harder to see much upside from here,” Baird analyst David George told Bloomberg. “The risk/reward trade-off in the bank group is getting somewhat unattractive.”