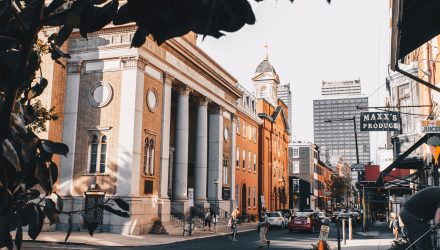 Bank Consolidation Could Lift This ETF

It has been awhile since the banking sector saw a legitimate wave of consolidation. In a sign that that could be changing,  Fifth Third Bancorp (FITB) said Monday it will acquire rival  MB Financial (MBFI) for $4.7 billion. That was the largest deal in the banking sector in three years.

That is not a monster deal, but it could signal that some banks are looking for bolt on deals with mid- and small-cap rivals. The SPDR S&P Regional Banking ETF (NYSEArca: KRE), the largest regional bank exchange traded fund, could be positioned to take advantage of increased industry consolidation. KRE holds 120 stocks with a weighted average market capitalization of $9.53 billion.

“It’s not hard to see why banks might decide now is a good time to get acquisitive,” reports Teresa Rivas for Barron’s. “The ‘too-big-too-fail’ threshold could eventually be raised to $250 billion in assets, from $50 billion, which would make smaller banks able to combine without becoming systemically important. Congress is also on the cusp of rolling back the financial rules put in place after the financial crisis, as well.”

“Credit Suisse’s Susan Roth Katzke argues that even with decades of consolidation, the U.S. banking industry is more fragmented than other developed economies, with just half U.S. banking assets in the four  largest banks, compared to 80% or more in other nations,” according to Barron’s.