You are at:Home»Equity ETFs»Australia ETF Could Steady in the Months Ahead 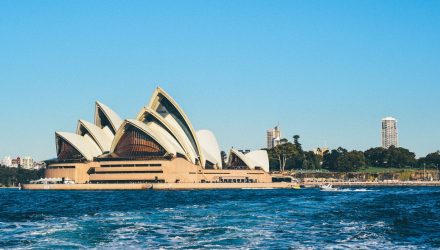 Australia ETF Could Steady in the Months Ahead

The iShares MSCI Australia ETF (NYSEArca: EWA) is down more than 4%, but stocks there could be steady plays as 2018 moves along. Australia is one of the largest developed market economies in the Asia-Pacific region and home to some of the highest interest rates in the developed world.

Thanks to comparatively high interest rates, Australia ETFs like EWA sport enticing dividend yields, which can help investors generate current income while expanding the international portions of their portfolios. EWA has a trailing 12-month dividend yield of 4.72%, or more than double the comparable yield on the S&P 500.

Additionally, Australia has one of the best sovereign debt ratings of any major economy.

“Australia’s ‘AAA’ rating is underpinned by strong governance, high income levels, and a track record of macroeconomic stability. An effective policymaking framework has supported 26 consecutive years of GDP growth without a recession, despite substantial external, financial and commodity price shocks during this period,” according to Fitch Ratings.

What To Expect from RBA

While the Reserve Bank of Australia (RBA) may be at the end of its easing cycle, there are few, if any, signs that the central bank there is poised to embark upon a tightening cycle.